As Kerala and Uttarakhand are in the throes of devastating floods, there’s frequent mention of alerts. Whenever there is danger of flooding, government bulletins, TV news flashes and weather organisation tweets often talk of red, orange and yellow alerts. On Tuesday, following a red alert, the Kerala government decided to open the shutters of the Idukki reservoir.

Who issues these colour-coded alerts? Are they standardised? At what level of impending hazard are they issued? When should you be just watchful, when should you pack your bags, and when should you actually leave the place? We give you the lowdown on weather alerts.

A green alert is, in fact, a ‘non alert’. It means the weather is just fine, and the IMD issues no advisory.

A yellow alert indicates people need to be aware of the danger — they may wait and watch, but not panic. Typically, heavy rain of 7.5-15 mm, likely to continue for a couple of hours, which may cause a flood, triggers a yellow warning.

When the weather worsens, it’s time for an orange alert. According to the IMD, this indicates the “cyclone can possibly cause the weather conditions to deteriorate, which can cause damage to the road and air transport as well as loss of life and property”. This normally comes with wind speed of 65-75 km/hour, and rainfall of 15-33 mm. There is a strong possibility of flooding. Evacuation plans are in place, but people are asked to stay home.

A red alert indicates immediate danger, with people in low-lying areas being asked to evacuate their homes and move to safer places. This warning is triggered by wind speed of 130 kmph wind speed and rainfall of over 20 cm in 24 hours. 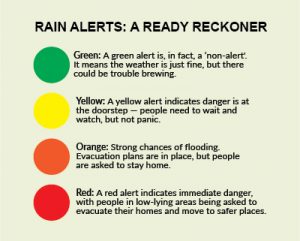 Dams and reservoirs are made to adhere to strict standards, and basically meant to keep you safe. However, when disaster strikes — either natural or manmade — there could be a breach, and the resultant flooding may cause extensive damage to the regions nearby.

It is here that dam management becomes important, and alerts critical. Administrations put in place intricate sensors to monitor the water levels and issue warnings when there is imminent danger of intense flooding or tidal wave or landslide following heavy rainfall.