In a scorched landscape on the Greek island of Evia, crews of workers chop burnt pine trees, all that’s left from devastating summer wildfires, to set up wooden flood barriers.

Walking on a thick carpet of ash and with the smell of smoke still lingering, they are racing against time to bolster defences before the autumn rains which threaten to flood coastal villages.

A group of resin producers set up wooden barriers against possible floods on the island of Evia, Greece, on 23rd September. PICTURE: Reuters/Alkis Konstantinidis

The vegetation which would normally absorb the rainfall and reduce runoff has been burnt and the soil might not be able to stop rain water from reaching seaside settlements.

“This is dangerous. If rains start now and go on for 15 or 20 days then all the rivers will overflow,” said worker Giorgos Diakomopoulos as he took a break.

About 300,000 acres of forest and bushland were burnt in different parts of Greece this past summer, amid the country’s worst heatwave in 30 years.

More than a third of the affected area, or about 115,106 acres was in northern Evia, data from Beyond, a research centre of the National Observatory of Athens, showed.

In the coastal village of Limni, many of its 1,500 population and tourists had to evacuate by boat to escape the apocalyptic blazes that turned the sky red in August. No-one died in the fires.

“We have to make it in time for the winter. We did not have to mourn any victims during the wildfires, and it is very important that we don’t have that problem with the floods,” said the mayor of Limni, George Tsapourniotis.

Cottage industries
In the burnt woods over Limni, green shoots have started to emerge, a sign that the forest will slowly regrow by itself.

The residents are not so sure their traditional crafts will find a renewed foothold after such devastation.

Most of the population there and in other villages across northern Evia were resin collectors, beekeepers and loggers who have lived for decades off the forest.

Evia had an annual output of 6,000 tonnes of resin, a crystallised sap extracted from the trunk of pine trees and used to make durable casting and flooring. This was about 85 per cent of the country’s total output. 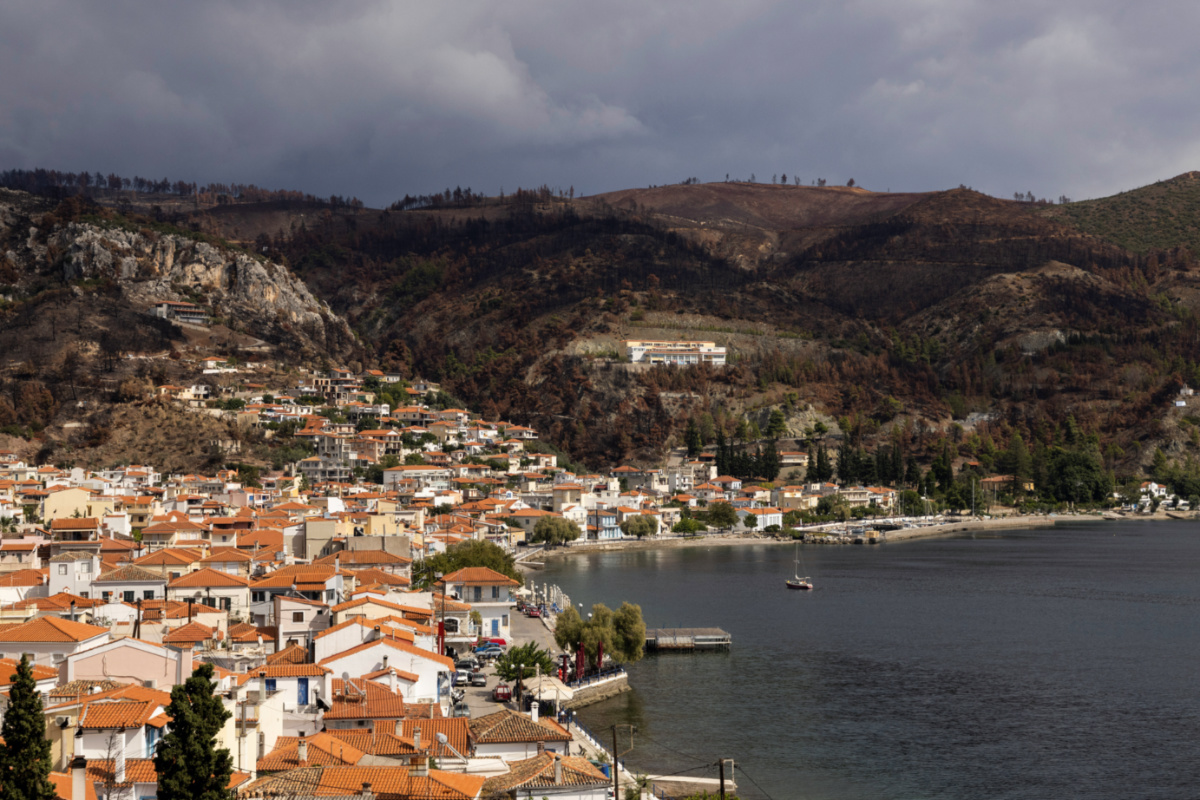 A view shows the burnt hills from summer wildfires next to the town of Limni, on the island of Evia, Greece, on 23rd September. PICTURE: Reuters/Alkis Konstantinidis

With most of the pine trees gutted by the fires, a year’s crop and a large part of the country’s production has gone.

“If we take into account cottage industries, a factory and all the other sectors destroyed by the fire, there are no jobs left in northern Evia anymore,” said Vangelis Georgatzis, who heads the island’s resin collectors union.

Yiannis Georgiou, a 40-year-old resin collector, has lost all his crop. “I ‘ve been really thinking of leaving. What can I do?”

“We knew that we were vulnerable to heatwaves lasting for three, four five days, but this time we have been taken by surprise…because these heatwaves lasted for about 10 days or more,” said Christos Zerefos, head of the Athens Academy Research Centre for Climatology and a climate expert.

“You can see that the very sensitive sensors of the earth which are at the poles, both are warning and saying ‘wake up and take measures now, not tomorrow’.”

Relying heavily on imported fossil fuel, Greece says it will ditch coal in power generation by 2025 to cut carbon emissions in line with 2050 EU climate targets.

Topographical engineer Stavros Benos has been tasked by the government to set out a plan to help the forest regrow and rebuild Evia.

Benos envisages an Evia where a regrown forest will be the core of a plan which, combined with new infrastructure and tourism, could offer new jobs.

“A new forest should be the focal point of the reconstruction,” he said. “If we don’t win the forest back, we will lose everything.”