A data analyst who worked for former President Barack Obama’s reelection campaign in 2012 is warning Democrats to stop talking about their immigration plans, including amnesty for illegal aliens and increased legal immigration to the United States.

David Shor, a key analyst with Obama’s reelection campaign, tells the New York Times that Democrats’ immigration agenda — t0 bring as many foreign nationals to the U.S. as possible — is so unpopular with Americans that they must stop talking about the issue altogether in order to win elections.

Ezra Klein writes for the Times:

Hillary Clinton “lost because she raised the salience of immigration, when lots of voters in the Midwest disagreed with us on immigration,” Shor said. This is where popularism poses its most bitter choices: He and those who agree with him argue that Democrats need to try to avoid talking about race and immigration. He often brandishes a table showing that among voters who supported universal health care but opposed amnesty for unauthorized immigrants, 60 percent voted for Obama in 2012 but 41 percent voted for Clinton in 2016. That difference, he noted, was more than enough to cost her the election. [Emphasis added]

Shor is right about how the Obama campaign understood the electorate. David Simas, the director of opinion research on Obama’s 2012 campaign, recalled a focus group of non-college, undecided white women on immigration. It was a 90-minute discussion, and the Obama campaign made all its best arguments. Then they went around the table. Just hearing about the issue pushed the women toward Mitt Romney. The same process then played out in reverse with shipping jobs overseas. Even when all of Romney’s best arguments were made, the issue itself pushed the women toward Obama. The lesson the Obama team took from that was simple: Don’t talk about immigration. [Emphasis added]

According to Shor, failed Democrat presidential candidate Hillary Clinton should have stopped short before engaging with former President Trump on the issue of immigration in the 2016 election.

“The implication of popularism is that Clinton shouldn’t have heavily engaged Trump on immigration and race, no matter the provocations,” Klein writes. “Instead, she should have stuck to a higher-polling economic message.”

Shor’s warning comes as President Joe Biden’s administration has forced the issue of immigration into the forefront again by announcing the largest refugee resettlement since the 1970s, a policy at the U.S.-Mexico border that allows border crossers to easily get released into the nation’s interior, and preventing federal agents from quickly arresting and deporting illegal aliens.

At the same time, the Biden administration and Democrats in Congress are looking to slip a massive amnesty for millions of illegal aliens into a filibuster-proof budget reconciliation package. Vice President Kamala Harris is facing pressure from open borders lobbying groups, as well as multinational corporations, to ram an amnesty through the Senate. 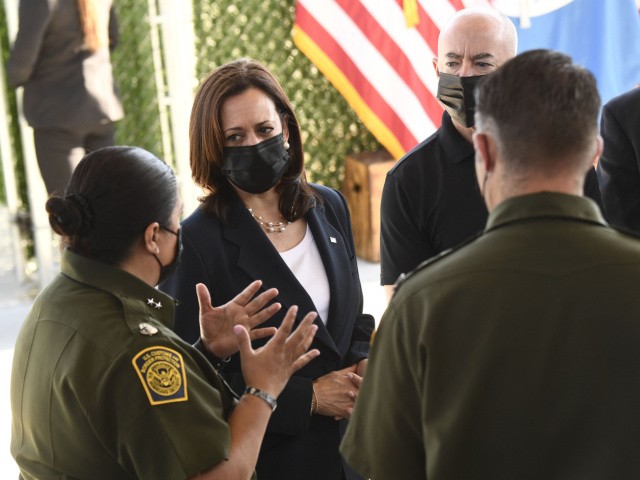 A separate analysis published by Democrat analysts in the Times last week revealed the extent to which Trump’s economic nationalism had won working and middle class communities that have been gutted by globalization over the last three decades.

This is not the first time Democrats have been warned to stop discussing their plans to flood the U.S. labor market with endless streams of illegal and legal immigration.

In October 2018, consultants with the Center for American Progress told Democrats running in the midterm elections that they needed to stop discussing the issue of immigration because their agenda was unpopular with most voters.

‘It is very difficult to win on immigration with vulnerable voters in the states Trump carried in 2016,’ the strategy memo said, arguing that ‘even the most draconian of Republican policies,’ such as family separation and threats to deport the Dreamers — undocumented immigrants who were brought to the United States as children — failed to sway most of them.’

John Binder is a reporter for Breitbart News. Email him at jbinder@breitbart.com. Follow him on Twitter here.