Queenslanders in the Capricornia district are being warned to brace for more severe weather today, after record breaking hail stones fell in the Mackay region last night.
The Bureau of Meteorology (BOM) has issued the warning, with more hail storms, heavy rainfall and damaging winds predicted for the central Queensland districts.
Residents in areas including Rockhampton, Mount Morgan, Yeppoon and Byfield have been warned to brace for the incoming storms.

“Severe thunderstorms are likely to produce damaging, locally destructive winds, large, possibly giant hailstones and heavy rainfall that may lead to flash flooding in the warning area over the next several hours,” the Bureau of Meteorology warning read.

Queensland Fire and Emergency Services have advised people in these areas to move their cars under cover and away from trees, and to secure loose outdoor items and furniture.

QFES also reminds residents to never walk or drive through floodwaters, to look out for fallen powerlines and to seek shelter, preferably indoors during thunder storms.

On the other end of the spectrum, major fire warnings are in place for other parts of the state.

A Severe Fire Danger warning has been issued for Northern Goldfields and Upper Flinders with authorities warning residents to “action your Bushfire Survival Plan now”.

The weather warning comes amid a week of dramatic weather for the Sunshine State, including two tornadoes and severe storms.

The abnormally large hail fell at Yalboroo, north of Mackay, as a supercell thunderstorm passed over the region yesterday at lunchtime.

The BOM confirmed some were the biggest they’d ever seen in the country, breaking the previous record of 14 centimetres set in Kempsey, regional New South Wales, back in 1999.

Meteorologists said they were expecting some storm activity in Queensland the wake of the severe weather on Monday, however the monstrous hailstones produced were not in the forecast.

Yesterday’s rare battering was the result of a number of factors that were able to keep the hail in the air while it continued to grow.

“Hail needs exactly the right conditions to form, and giant hail needs even more, varied factors to come together. This is why giant hail is quite rare,” a spokesperson for the BOM said.

“Once these thunderstorms developed, the atmosphere was extremely unstable, which allowed hail to continue growing before gravity forced it hail to the ground.”

The longer that hail stays airborne, the larger it can grow, according to meteorologists. 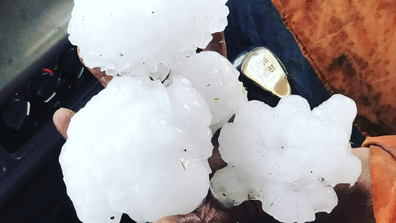 Although the hail is a new record for Australia, it’s not a world record.

In NSW, showers have been forecast around the Northern Rivers and across the state’s north, while damaging winds, averaging between 60 to 70 kilometres an hour, with peak gusts in excess of 90, are likely for Cabramurra and surrounds at the Snow Mountains.

Victorians can expect a mostly fine day, however there are minor flood warnings for the Latrobe and the Yarra Rivers.

Earlier this week, Queensland was hit with giant hailstones and tornadoes in areas like Pittsworth, south of Toowoomba and Bracewell, near Gladstone.

While the potential tornadoes absconded quickly, leaving no damage to neighbouring towns, homes in the Darling Downs, the Highfields north of Toowoomba and other parts of southern Queensland weathered the storm.